Clooney Quin U12 hurlers travelled to Mullinahone on Saturday last (Aug 31st) to participate in the annual CJ Kickhams Festival of Hurling.

The tournament has been running for 18 years with Clooney Quin being represented for many of those. Our teams have always been competitive but had never managed to win the CJ Kickhams Cup.

Wearing Clare colours, our tournament opened with a tough encounter against Naoimh Eoin from Belfast. Even though we led from start to finish we could never really shake of the northern challenge but won out on a score line of 2-7 to 2-5.

Next up was the challenge of Eoin Ruaidh from Dungannon. Eoin Ruaidh are a physically imposing team that never compromised in the tackle. But our U12s yielded not an inch and prevailed in a bruising encounter by 0-6 to 04.

Victory over Eoin Ruaidh meant our clash with St Marys, Clonmel would decide which team would go through to the Cup semi-final as group winners.

Another close game ensued with the Clonmel boys showing good stick work and team play. But the Clooney Quin boys were better and controlled the second half to come out on top 1-7 to 1-3.

With very little time for a break our lads faced Fermoy in the Cup semi-final. The Cork boys were physically a bit bigger that our lads and they could hurl. They very quickly showed their intent by firing over a good point right at the start. Our lads kept their composure and worked diligently to subdue the Cork midfield. Eventually the scoring opportunities came and our lads don’t need to be asked twice. After holding a narrow advantage at half time, our scoring machine kicked into gear in the second half and having gotten our noses in front, we never looked like losing. Full time 2-8 to 1-4.

The Cup Final opposition were Kildalkey from Co. Meath. Kildalkey scored heavily in the their group games to overcome Four Roads (Roscommon), Derry and CJ Kickhams Green team. In the semi-final they accounted for the second CJ Kickhams (Red) team.

From the throw in, the scoring threat from Kildalkey was obvious with their full forward firing to net from their first possession. But our boys don’t do panic. Puc out, pass, point was the perfect response. Excellent defending snuffed out the next Kildalkey attack and the clearance coupled with some fluid half forward movement created a goal opportunity that left the net shaking. The Clooney boys started to suffocate the Meath players in the middle and though Kildalkey managed another 3 points in the first half, the scoring threat from Clooney Quin was much more potent resulting in a half time score line of 2-6 to 1-3.

Clooney Quin motored on in the second half with excellent defending and midfield play creating a platform for the forwards to work some excellent scores. The strategy of using the full squad throughout the tournament paid handsome dividends. As the Kildalkey boys tired visibly, our team still had a pep in their step. Fulltime score line Clooney Quin 5-11 Kildalkey 1-4.

All players played a valuable part in the tournament victory. Every player played a full game in the group stage and played a part in either the semi or the final. The leading scorers were Jerry O’Connor, Matthew Corbett and Darragh McNamara with valuable scores also provided by Conor Clancy, Cathal Leamy and Loughlin Carey. Conan Fennel, Darragh Moloney and Conor McFadden also worked hard up front and provided invaluable assists at vital times. Midfield was controlled expertly by David Cahill, Cathal Leamy and Tadhg O’Caoimhe. The defensive platform was provided by the excellent Sean McNamara, Sean Cassidy, Tadhg McMahon, Michael Hassett, Matthew Murphy, Damien Guilfoyle and Patrick Finneran. And Donnacha Cantwell had a good day between the sticks.

The coaching team is very pleased with the performances of all the players. Everyone played to the max of their ability and the passing, movement and team work was outstanding at times.  Thanks to the parents who travelled in support of the team and who assisted the coaching team throughout the day. A great day was had be all. 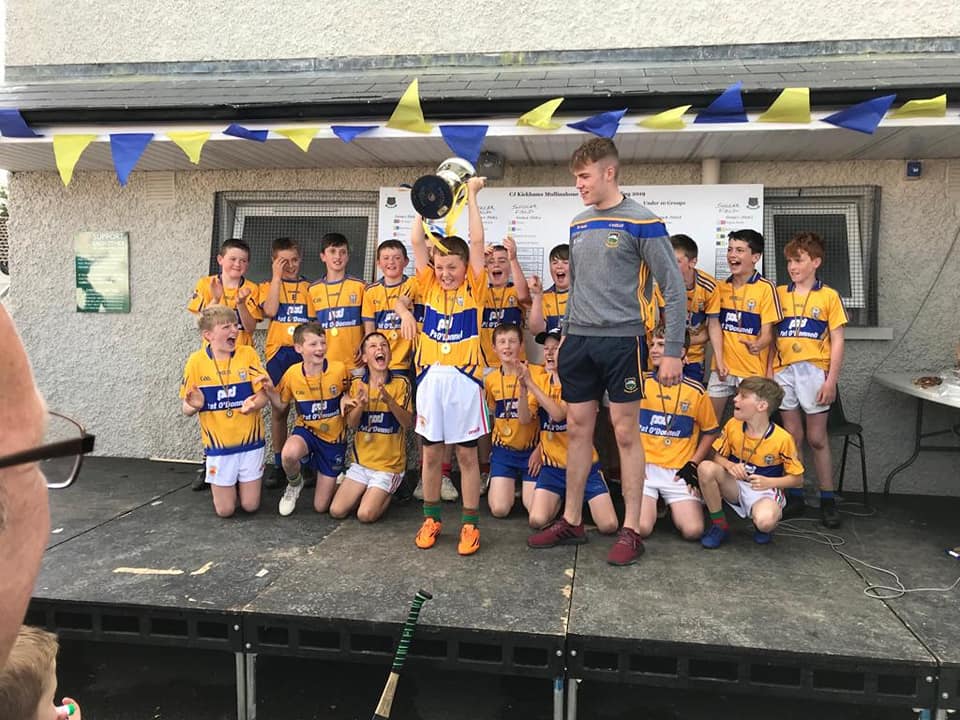