It has been a long season for the girls of the Clooney Quin U12 ladies football team. Training began in earnest in March with sessions on Astro as the grass sod failed to filter away the heavy rainwater that had peppered us during the days in spring. Very useful training matches were also played at home in mid-March against a Fergus Rovers u12 selection and on Astro in Shannon Banks against East Clare Gaels where the Clooney girls demonstrated that the girls had maintained their skill level after a tough first year playing u12 in 2018.

The Division 2 league got underway in early April at home to a formidable Burren Gaels team. A narrow defeat resulted however it was a confident performance by the Clooney girls. Games away to The Banner, Cooraclare and Kilmurry ibrickane were all comfortable victories for the Clooney Quin team however home defeats to Miltown and Corofin left the girls mid table at the end of the league.

After a few weeks break the U12 Division 2 Championship was next on the agenda. Due to its timing during the summer holidays our team was not at full strength due to vacationing and injury but despite this the league has to go ahead and it started with hard fought, fractious encounter with Burren Gaels in the scenic location of Carron in north Clare with hosts holding off a tenacious CQ fight-back to take the win. A team to play away to newly promoted Clarecastle was also hit with many absences requiring u10 players to be promoted to the older age group and again, despite a second half fight-back the Clooney girls recorded another loss. The next up was a game away to Miltown and with so many players absent and despite a spirited display it was another away defeat. The championship was not looking good at all however a single home win versus a brilliantly talented and underestimated Cul Gaels team presented us with the chance to play a shield final versus Miltown in Fr McNamara Park. This final was played on the 8th of August  the panel on the evening was: Amy Collins, Aoife McHugh, Sive Timmons, Caoimhe McDonnell, Ciara O’Dwyer, Sarah Slattery, Saoirse Brennan, Kate Senton, Rachel Coneely, Melanie Howard, Eimear Fitzgerald, Adriana Miniter, Aoife Toher, Bebhinn Gallagher, Doireann Egan, Amber Killeen O’Brien, Ava Leamy, Lily McDonald and Lucy Madigan. Again due to large unavailability of players James Madigan provided u10 players to the squad for the final, with them impressing in the latter stages of the game. Despite a big second half push it was not enough to overcome a large goal advantage from the first half with Miltown deserving winners.

This loss meant a rematch for a Plate final in Clooney versus Cul Gaels. A near full strength team was available to play  this final with the game nip and tuck the whole way through. With Clooney leading for the vast majority of the second half a well rehearsed Cul Gaels short free kick in front of the Clooney goal when the Clooney girls were not ready resulted in a one point lead to the end of the match. With Clooney unable to take their scores in the last few minutes including a close-in free kick Cul Gaels came out on top by the narrowest of margins.

No trophy this year but there was plenty to be encouraged by.

Training continued into September and October with sessions held in Quin Dangan School. Training was pointed towards 2020 and working to playing a full size pitch and these sessions were also attended by the older Under10s ladies team. Very competitive games were played at training with the u10s showing their older age group that they were just as capable and confident on the ball.

An invitation to the Marion Keane u12 Memorial Tournament was accepted by the club and this was played on Saturday 19th October. We played in Division B of the tournament and the girls played six games in total making it to the final against our near neighbours Newmarket on Fergus.

Clooney Quin lost to NoF in the first round however they convincingly beat Monivea B, Wolfe Tones and KIB in the other groups games. A win in the semi final against the winners of the other group, Cul Gaels, was some redemption for our Plate Final defeat however a final against County Championship Division 1 Newmarket team beckoned. The game was riddled by errors on both sides with a much improved Clooney performance from their first game against NOF however despite massive amounts of dominance by the Clooney girls they were unable to hit the target in front of goals losing 2.3 to 0.2.

On the 23rd October 2019 Scoil Na Mainistreach Quin Dangan won the Division 1 Cumann na mBunscoil final in Cusack Park Ennis against a very good footballing side from the national schools of Bansha, Annagh and Clohanes. This win was a phenomenal victory for these girls and led to wild and deserving parties throughout the village. The teachers, parents and supporters were overcome with emotion and pride at the girls display of their footballing skills and their fortitude to come from behind in the match to complete Quin Dangan’s second ever victory at this grade. It is with this great victory that we can bring down the curtain on this very good year for these girls. Special thanks to Eleanor Gallagher, Rebecca Kennedy, Sile Daffy, Sinead O’Rourke and Fergal Lynch at the school for their guidance and expertise in bringing the Division 1 trophy back to Quin. 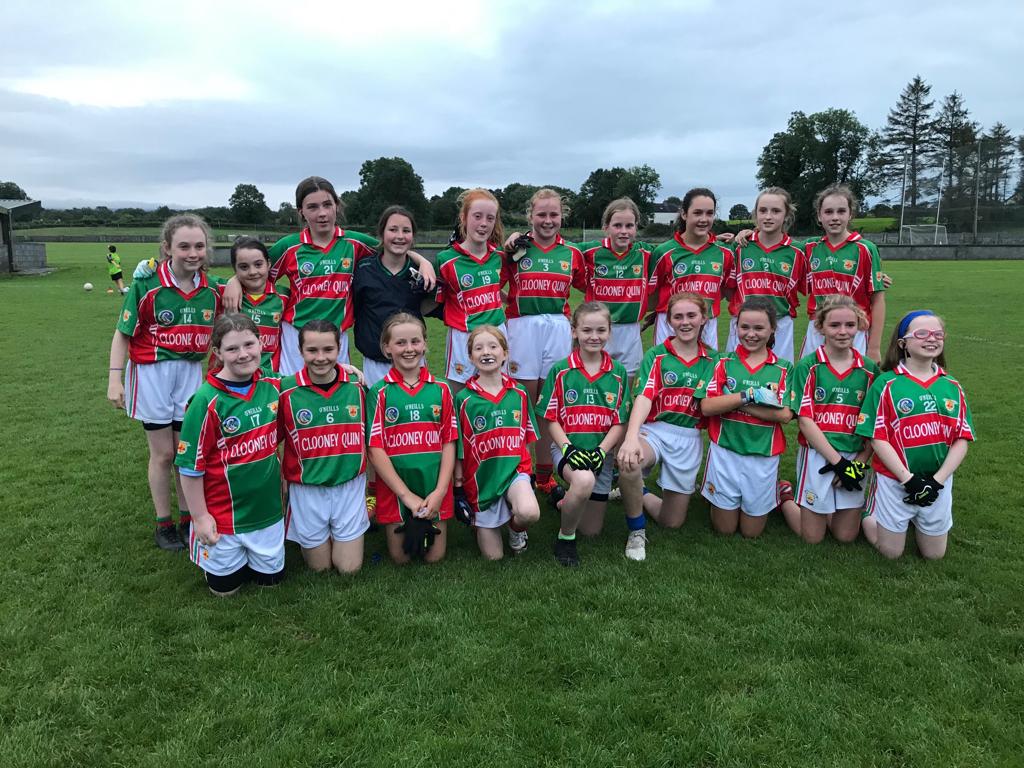